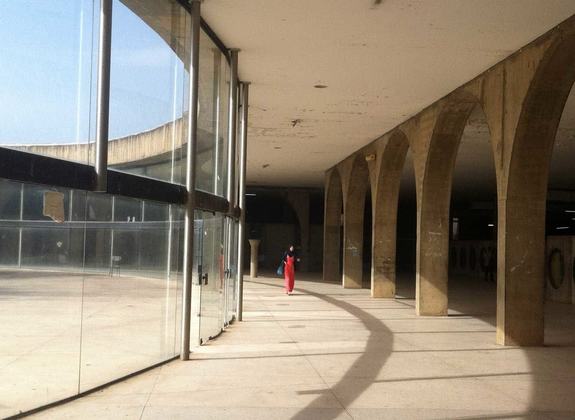 Share
Widely regarded as one of the 20th centuries greatest architects, the Brazilian Oscar Niemeyer designed 12 buildings for Algeria, most of them during the period of his exile after the military takeover in Brazil in 1964.  Only 4 were completed,1 the others being stopped by the death of Houari Boumedienne, though the Arab-South America Library he designed in the years before his death is still planned for construction.2  Attention is generally focused on Niemeyer's projects in Brazil and Europe at the expense of projects in places like Lebanon and Algeria.  Nonetheless, they are an important part of his architectural legacy.

For Boumediene Niemeyer's buildings were a sign of Algeria's modernity and commitment the rupture with the past.  Construction began on the facility in 1968, and the university opened its doors in 1974 as the Faculté des Sciences of the the university in Algiers.  The name became the L'Université des sciences et de la technologie Houari Boumediene in 1980 and the school eventually became and independent entity.3  It is one of two university campuses designed by Niemeyer. The other, in Constantine, is the University of Mentouri.