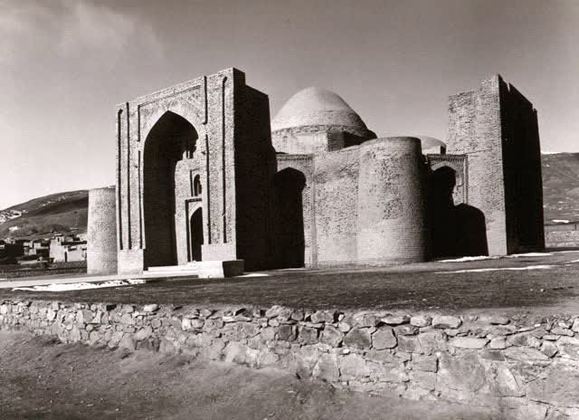 Share
The Mausoleum of Ulugh Beg bin Abu Sa'id, son of Timurid Sultan Abu Sa'id, was erected to the east of Ghazna, at the site of a village known as Rowza on a hill overlooking the ruined palace of Mas'ud III. Ulugh Beg governed Ghazna and Kabul from 1460 until his death in 1501-1502/907 AH, while his son and successor 'Abd al-Razzaq was dethroned within a year. The mausoleum was probably built by Ulugh Beg for himself and also houses the remains of 'Abd al-Razzaq who died in 1513-1514/919-920 AH.

In the 1960s, an IsMEO (the Istituto Italiano per il Medio ed Estremo Orient) team lead by architect Andrea Bruno cleared the mausoleum of later additions and restored it to serve as a Museum of Islamic Art, to display artefacts excavated from Ghazna and the Mas'ud III Palace. The mausoleum-museum suffered from rocket attacks and negligence during the Afghan civil war. In 2000, the Society for the Preservation of Afghanistan's Cultural Heritage (SPACH) initiated an emergency conservation project; the roof was rebuilt with a traditional thick straw-mud layer and thirty doors and windows were replaced.

The mausoleum has a radially symmetrical plan and section: a square structure, 20 meters per side, buttressed with four circular corner towers and four monumental pishtaqs. The pishtaqs -- nine meters wide and ten meters tall -- project three meters beyond each façade, and are tied back to the corner towers with low, diagonal archways housing five-sided niches. The ensemble is raised on a square plinth housing a vaulted crypt and aligned with qibla to the southwest.

This radial symmetry continues on the interior, which is divided into nine chambers. The domed burial chamber -- about six and a half meters per side -- is set at the center. Lit by four clerestory windows, it contains three mausolea placed off-center. The burial chamber is flanked on each side by an elongated oval antechamber opening out to the pishtaq. This oval plan is achieved by extending a domed square hall with semi-domed polygonal exedrae on two sides. The southeast antechamber is distinguished by semi-circular exedrae carved with niches and contains the crypt's staircase in its arched doorway into the burial chamber.

The mausoleum is built entirely of baked brick. The pishtaqs are decorated simply with blind niches and brick molding, possibly the former bedding layer for tile mosaics. The interior is plastered with a mixture of earth and straw (coghel), with no traces of painted ornament. Blind archivolts and muqarnas squinches of the central hall were carved into plaster. Fragments of alabaster wainscoting can be seen in the western corner room.

Bruno, Andrea. "The Planned and Executed Restoration of Some Monuments of Archaeological and Artistic Interest in Afghanistan." East and West 13 (1962): 99-185.

Knobloch, Edgar. "Survey of Archaeology and Architecture in Afghanistan, Part I: The South-Ghazni, Kandahar and Sistan." Afghanistan Journal, v. 8, iss. 1 (1981): 3-20.