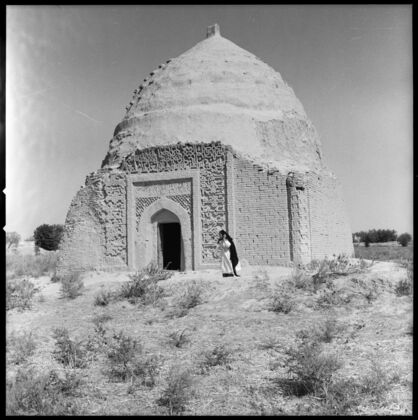 Share
The mausoleum of Baba Hatim or Salar Khalili is a domed tomb at Imam Sahib, a town sixty kilometers west of Mazar-i Sharif on the southern road to Aqca. Based on its form and decoration, scholars have proposed an approximate date of the eleventh/fifth century AH. It was restored extensively between 1978 and 1979 by the Délégation Archéologique Française en Afghanistan and l'Institut Afghan d'Archéologie.

Today the mausoleum stands in a cemetery outside the nearby town. mausoleum is a square brick chamber with a pointed brick dome and measures about nine and a half meters per side on the exterior. It sits slightly off the cardinal axis, with its portal facing south-southeast. The pointed portal arch is set in a rectangular frame made of a thick band of knotted Kufic lettering made of bricks. Partly damaged, the inscription identifies the owner of the tomb as Salar Khalil Sayyid.

When the restorations began in 1978, the tomb was structurally unstable, with layers of bricks stripped down from the top of its walls on the exterior. Excavating the walls to reveal their original height, the restoration team replaced the missing bricks, restoring the original cubical shape to the exterior and the four octagonal colonettes embedded at its corners. The dome was reassembled with new mortar and refinished on the exterior with plaster and studded with pairs of bricks protruding in four concentric rings. The circular and octagonal drums of the dome were also reconstructed, and a metal finial was placed atop the dome.
Inside, a large unmarked cenotaph is placed at center, with the head facing the entrance. Arched niches are carved into center of the 1.27 meter thick walls. The transition to the dome is achieved with trilobed squinches at the corners, mirrored with trilobed blind arches above the side niches. The interior is dimly lit with four small windows pierced into the dome's drum.

The original stucco decoration of the dome chamber has largely survived and was also restored. Stucco panels with geometric panels adorn the walls from the springing of the niche arches to the squinches, and bands carved with kufic inscriptions frame niche and squinch arches. A broader inscriptive band in Kufic characters envelops the dome's rim. The curved surfaces of the squinches are covered with a variety of floral patterns carved in stucco.