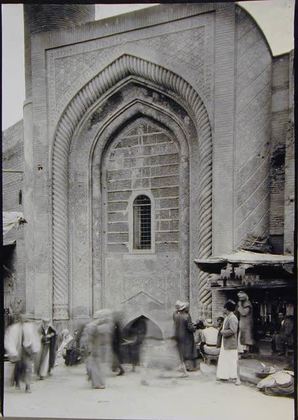 Share
Madrasa Mirjaniyya in Baghdad's eastern neighborhood al Rusafah on Rashid Street close to Suq al Thulatha' no longer exists in its integrity. During a public works program in 1945 involving the enlargement of Al Rashid Street, part of the madrasa was destroyed. The entrance gate and the minaret attached to it remain. Later, near the entrance, a new mosque was built using materials including inscribed slabs (founder's waqfiya) from the old prayer hall of the madrasa. Some of the madrasa's decorations were taken to the museum of Baghdad while others were put in the palace of Qasr 'Abbasi.

Built in 1357 by Amin ad-Din Mirjan, Wali of Baghdad under the reign of Shaykh Hassan, the founder of the Jalayirid dynasty, it was to serve the Hanafi and Shafi'i mazhab (Sunni theological school). An inscription over the entrance façade refers to the financial sources coming from Shaykh Hasan's mother. In addition Mirjan donated several waqfs for his madrasa preservation and survival that were inscribed on the madrasa walls.

The building, almost square, measures 39.2 by 36.8 meters on two floors that are chamfered at the northern corner. It is mostly built of bricks set in mortar. It houses a school with thirty student cells and classrooms, a mosque and a mausoleum arranged around the courtyard. The combination of theses three functions under one roof is the only available example in Baghdad. It recalls earlier Seljuk buildings, especially in its distinctive entrance decoration.

The complex is accessible through a monumental portal with a pointed arch set in a rectangular frame reaching two floors, in the style of the later Seljuk Ilkhanid constructions. The arch is made of several recessed alternating concave and convex bands of lavishly incised stucco with terracotta inserts with deep arabesque designs, rope and floral motifs. The entrance is formed by a barrel vaulted passageway intersecting with a square vaulted chamber with recesses on its two sides similar to two iwans with pointed arched openings. It communicates through the courtyard with a similar opening. Above the entrance lies the watchman's room with two windows looking onto the courtyard and the street. Around the window on the façade are several lines of elaborate inscriptions explaining the intention of the patron, while geometric and floral motifs carved in stucco frame the lower openings. The entrance in flanked by two semicircular decorated buttresses of 10.8 meters, the left hand side of which forms the base of the minaret. Its lower part is decorated with geometric patterns similar to the ones of the gated iwan while the upper trunk bears no decoration. It ends with a balcony built on eight bands of brick muqarnas and topped with a circular dome at 26.4 meters high from ground level.

The inner courtyard is almost a square measuring 21 by 20 meters. It is surrounded by the mosque, the tomb of the founder and an iwan with several rooms or cells opening onto the courtyard. Four staircases insure vertical circulation to the upper story consisting mainly of student cells. Three doors underneath a wooden tarimah (overhang on wooden slim columns with a higher central section) built in the courtyard constitute the mosque access. The central door is the largest entrance, it faces the qibla wall and the mihrab. A second mihrab is situated in the left section of the prayer hall. The mosque is thus divided into three chambers by means of two large pointed transverse arches supported by the longitudinal wall on both sides. A large dome with eight windows, sits on three sided pendentives. It covers the central bay of the mihrab, while two smaller domes on concave pendentives cover the two side bays. The central dome pendentives are decorated with terracotta geometric honeycomb patterns.

The mihrab located in the central bay below the biggest dome is a pointed arched niche enclosed in a rectangular frame where the original structure was built. The niche is flanked by incised borders displaying leaf scrolls motifs, each subtly different.

Facing the prayer hall is an opened iwan leading onto the courtyard. It was used as the main outdoor study space; it spans the two floors and reaches 10.8 meters high. The iwan displays a pointed barrel vault with an inner wall decorated with floral motifs and inscriptions carved. This stucco work is now exhibited at the Baghdad museum.

Facing the main entrance of the madrasa was the tomb chamber of Mirjan. He was buried there in 1372. It is now destroyed. The tomb chamber is accessible from the courtyard through an arched doorway set in a plain rectangular recess bearing no ornament except an arched window with mashrabiyya located above. The tomb chamber is square in plan with recesses on its four sides in a way similar to four iwans creating the impression of a cross-shaped plan. The tomb chamber is topped with a dome that has no equal in Iraq. It is built on a high ribbed circular drum of hazar-baf construction brickwork (the are also called engaged columns), The pointed arched profile dome is separated from the ribbed drum with a band bearing a geometrical pattern in two colored glazed tiles. The interior has minimal decoration, as it was not supposed to be his tomb. On the lower section there are varied decorative patterns derived from palmette motifs, star and cruciform motifs interlaced with vegetal motifs, stalactites, and inscriptions. The dome from the interior is composed of a shell with twenty-four ribs. It sits on three layers of muqarnas of different shape that insure the transition from square to circle. The muqarnas layers are perforated by two windows lighting the space below. The tomb chamber is connected by a doorway to a side hall toped by a smaller dome.

Suleiman Pasha, Wali of Baghdad in 1785, started the first restoration of the complex. It is illustrated by a poem inscribed on a glazed tile panel placed above the main entrance of musalla. According to which: he enlarged the prayer hall by adding two halls, one on each side that was reached by large openings with segmental arches; he covered the original brick mihrab with decoration; built a brick minbar covered with glazed tiled of light green and white; tiled the lower part of the walls up to one meter level with the same glazed tiles; built a square platform for ablutions. These additions suggest that Suleiman Pasha's objectives were to transform this madrasa to a congregational mosque which would later be called Jami' Mirjan or Mosque al Mirjan.

The musalla was later, during the reign of Midhat Pacha in 1871, coated with plaster. The latest restorations were carried in 1926 sponsored by Vizier Muhammad Amin Ali Pasha: he repaved the courtyard; renewed the zulla with a modern one; replaced the brick minbar with a new wooden one. He also restored the tarimah in front of the prayer hall and enlarged its three doors, decorating its walls with colored motifs and repairing the inscriptions on the outer entrance façade. Modifications to the façade resulted in meaning distortions due to the omitting of some words and the replacement by others.