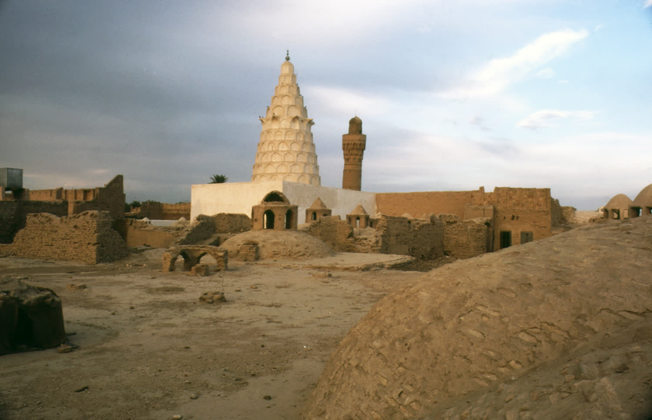 Share
The Dhu al-Kifl shrine is situated in the village of Kifl, between the towns of Hillah and Najaf, one hundred and thirty kilometers south of Baghdad. It is part of a complex comprising a mosque, minaret and several khans. The site was originally a place of Jewish pilgrimage as it housed the tomb of the prophet Ezekiel. The Iraqi authorities assert that in 1316 the Ilkhanid Sultan Uljaytu acquired the rights of guardianship over the tomb from the Jewish community. Consequently, the shrine was re-named according to the Islamic nomenclature for the same prophet. Sultan Uljaitu added to the structure by building a mosque and a minaret. He also restored the shrine implementing some alterations made clear by comparing its present state with pre-Ilkhanid travelers' descriptions. The site remained a Muslim pilgrimage place until the beginning of the nineteenth century when Menahim Ibn Danyal, a wealthy Jew, successfully converted it back to a Jewish site and restored it. The minaret remained as the only witness to its tenure as an Islamic site.
The turba or shrine is of brick construction covered with adobe. It shares the southern wall with the mosque. The shrine is accessible by two entrance doors situated in the mosque's southern wall. The central opening under the dome was added in a nineteenth century restoration that replaced the mihrab on the mosque's qibla wall. The second entrance, smaller in size, situated on the side is the original one. The shrine has a rectangular plan divided into three squares; the two side rooms are roofed with muqarnas domical vaults, while the central bay above the sarcophagus is covered with a muqarnas dome.
The muqarnas dome is the first example of Iraqi architecture having an outside shell independent from the internal one, a practice started in the Ilkhanid period. From the inside, five layers of muqarnas squinches provide the transition from the square to the circular base of the dome. These transitional layers are punctured with four windows facing the cardinal points. They provide the only source of light to the tomb chamber. The interior is whitewashed, though the dome's surface and the upper part of walls are painted with polychrome patterns dating from the Ottoman period. On the southern wall facing the entrance there is a mihrab-like flat niche. The external dome shell is composed of eleven layers of pointed muqarnas built on an octagonal base and topped with a small circular dome. The exterior is plastered with adobe and mimics honeycomb patterns.
Sources: