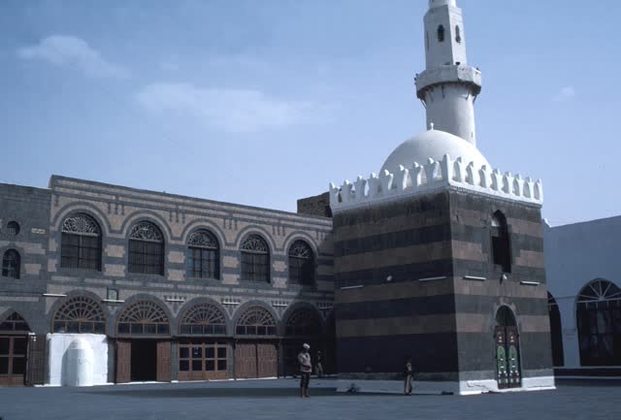 Share
The Great Mosque at Sana'a is organized around a central courtyard measuring approximately 80 meters long by 60 meters wide. To the north and south are its prayer areas, with five and four aisles, respectively. To the east and west of the courtyard are halls of three aisles each. Arcades mainly composed of pre-Islamic material from other sites form the aisles of these sections. Inside the court, not exactly at its center, stands a domed square structure that dates to the early sixteenth century when the courtyard itself was paved. Although this Ottoman building somewhat resembles the Ka'ba at Mecca, with its ablaq design of alternating layers of varying colored material, scholars argue that it was probably not modeled after it, as the ablaq technique of construction predates Islam in the region. It served as a treasury and then a storage unit for waqf documents.

According to early sources, the Prophet Muhammad commanded the construction of this mosque, including its location and dimensions, sometime around 630. While the validity of this claim lacks evidence and certainty, the mosque remains one of the first architectural projects in Islam. Sometime between 705 and 715, the Umayyid Caliph al-Walid I, rebuilt a new and larger mosque at the site.

With its flat-roof supported by interior stone arcades, it has been argued that the plan of this mosque recalls Byzantine building traditions from the Axumite empire (present day Ethiopia); this is supported by the fact the empire's grandest church was erected in Sana'a. In fact, parts from this cathedral were integrated into the design and composition of the Great Mosque together with pieces taken from early pre-Islamic structures in South Arabia, including the Gumdan palace of the Himyarite era, and Christian and Jewish places of worship. An excellent example of this material reuse is a stone arch support inscribed with text in the pre-Islamic language of the region, as can be seen in the thumbnails above. Most important, however, al Walid's redevelopment of the mosque provided the structural framework for successive interventions, of which there have been many. Just a few decades later, an inscription in the courtyard dates work by the Abbasids to 753 and by the thirteenth century the community had restored the mosque's two minarets, one to the east, acquired prior to the early ninth century, and one to the west which was built at a later date. The mosque had also been damaged twice, first by a flood in 878 and second, by Karmatis invasion into the city in 911. In 1130, the Isma`ili Queen Arwa ibn Ahmad initiated a campaign to upgrade and restore the mosque. Towards this end she rebuilt its eastern wing complete with a new beautifully sculpted ceiling. She also improved the ceilings of the western and northern sections of the building. Queen Arwa had close political ties to the Fatimid dynasty in Egypt. Accordingly, it has been speculated that the western minaret dates to her rule as its contribution to the overall composition of the mosque renders its plan similar in design to mosques of the same period in Cairo, with the two minarets flanking a central entrance.