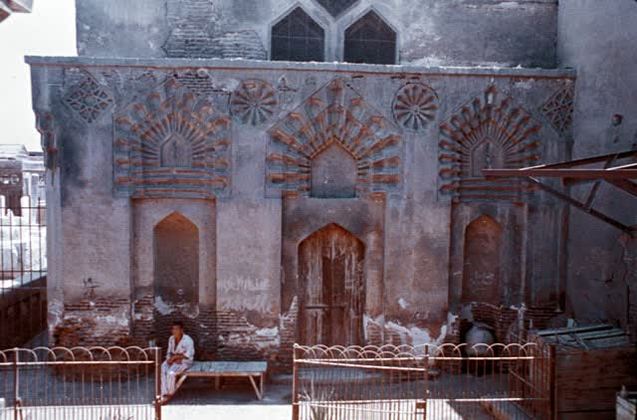 Share
The Mausoleum of the 'Abbasid Caliphs was constructed in 1242-3 as the mausoleum for Abu Nadla Hashim, the ambassador from the 'Abbasid court to Cairo, but later became the burial site for several 'Abbasid caliphs after Sultan Baybars I founded an 'Abbasid caliphate in Cairo. It is also the burial site of two of Sultan Baybars al-Buduqdari's sons, so he may have built it in the 1260's. To Baybars is assigned the hosh (courtyard) with its vaulted stone entrance hall, which he presumably built when his son was buried in the mausoleum in 1266.

The dome of this mausoleum is carried by four two-tiered squinches. However, by having an upper tier with three niches instead of one, this squinch represents a further step in the evolution of the muqarnas squinch. The niche comprising the upper tier is here flanked by two niches which fill the space between the windows and the muqarnas squinch. The result is a remarkable octagonal zone of transition, comprising a ring of alternating three-light windows and two-tiered squinches, both subdivided into modular keel-arched shapes, with the space between the squinches and the windows articulated to match the overall unified, modular composition. This format, which probably makes its first appearance here, subsequently becomes standard in all domes with squinches. These keel-arched windows of three lights display the second earliest Egyptian example of stucco window grilles, with a floral arabesque design, with the glass intact (the window under the dome behind the pistaq in al-Azhar added by Caliph al-Hafiz is the oldest).

The stilted profile of the dome of this mausoleum, which is smooth, was introduced during the Fatimid period both to ribbed and smooth domes, and remained in use up to the early Mamluk period. The interior of the dome is noted for its splendid carved stucco and painted medallions. Crowning the zone of transition is a frieze of braided, painted Kufic inscription, an example unique in Cairene buildings.

The exterior of this mausoleum continues the Fatimid legacy of exhibiting chamfered corners and recesses surmounted by keel-arched, fluted shells.