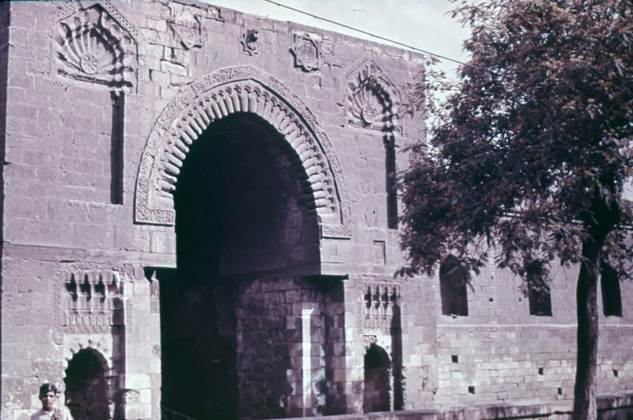 Share
The mosque for Sultan Baybars I was constructed under the Atabeg Faris al-Din Aqtai and the vizier Baha' al-Din 'Ali ibn Hinna (1267-9) and dedicated as a Friday mosque with a Hanafi khatib for the Husayniyya quarter. It was the first congregational mosque to be built in Cairo after the elimination of the Shafi' monopoly on jurisprudence, which restricted Friday prayer to a single congregational mosque.

It is a hypostyle mosque whose arcades are deployed in a pattern that alludes to the cruciform layout, and incorporates a nine-bay iwan qibla or maqsura in front of the mihrab defined by piers carrying a wooden dome. This dome, which Baybars is reported to have instructed the overseers of the construction to build with wood from the citadel of Jaffa, which he had had dismantled in 1268, disappeared a long time ago.

The mosque borrowed visual themes from other historical foundations to emphasize the commitment of the new dynasty to the ideology associated with the patrons who built these foundations. Emphasizing such a commitment was deemed indispensable by the new dynasty for legitimizing its new rule.

The central section of the sanctuary, consisting of an elevated triple aisle and the maqsura, is flanked by aisles formed by arcades on columns running parallel to the qibla wall. This configuration of a transept emphasized in height and flanked by transverse aisles points to the classical hypostyle mosque design, and could probably have associated its founder Baybars with the glory of the age during which this classical type originated. But more importantly it served as a strong reminder of the resurgence of Sunnism in Egypt.

The pendentives carrying a dome over the passageway in the northwestern (main) entrance, the groin vaults in the southwestern and northeastern entrances, the cushion voussoirs of the arch over the main entrance, and the bonding of masonry with transversely laid columns are all features recalling the Fatimid gates of Badr al-Jamali. This is the first known example of the introduction of such a dome and vault into mosque architecture in Egypt. The northeastern gateway houses the earliest example of ablaq decoration in Cairo, here executed in stone. This technique, which soon after the construction of this foundation was also translated into marble, later became a standard practice in Cairene monuments. Other preserved decorative features include stucco ornament and Kufic inscriptions.

Enforced with buttresses, the massive exterior walls of the freestanding mosque, with the three protruding monumental portals and the corner towers, render the imposing exterior fortress-like. The mosque shows the synthesis of local and imported styles and techniques developed during the early Bahri period.