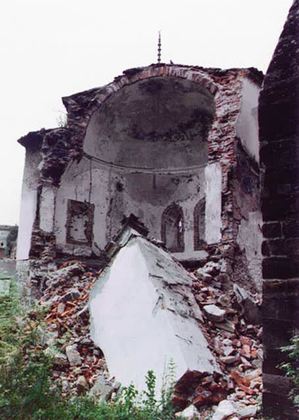 Share
The institution of the Hadim Suleiman Aga Library was founded in 1595, although its building dates from 1733. Its collection included the regional archives of the Islamic community dating back to the seventeenth century, as well as approximately 200 manuscript codices and 1,300 rare books in Ottoman Turkish, Arabic, Persian, and Aljamiado (Albanian in Arabic script).

On March 27 and 28, 1999, the library's collection was destroyed in a fire set by Serbian police and paramilitary troops. However, much of the building, including the front facade, was not destroyed in the fire. In 2000, the Saudi Joint Relief Committee destroyed both the Library and the cemetery adjacent to the Hadim Suleiman Aga Mosque.