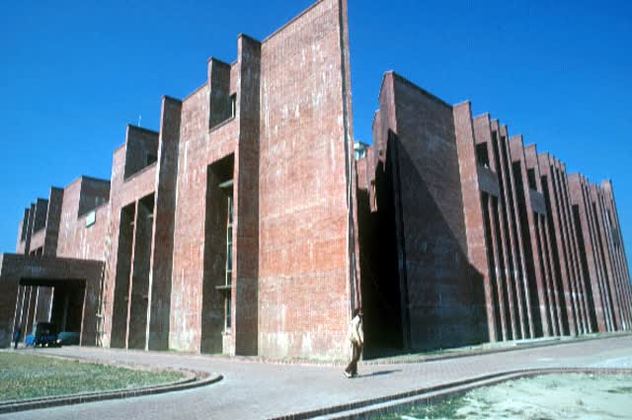 The National Library is a centralized volume of a sharp geometric configuration situated near Louis Kahn’s National Capital Complex. It was commissioned by the Ministry of Cultural Affairs as part of a complex, which is to include the National Archives. The project, with its stereotomic earth-hugging character, differs sharply from the skeletal quality of Islam’s earlier projects, bringing a different quality of geometric and spatial complexity. The parti of the Library began as a pure square from which was slowly and deliberately distorted to acknowledge the contradictory demands of climate, place, and program. The distortion of the idealized form itself became the generator of architecture; from the compact square core of the configuration, one proceeds towards the periphery with its fissures, incisions, and cutouts.

The process of distortion also suggest a new opening in Islam’s steadfast materialist ideology; it reveals a surreptitious triumph of the empirical over the rational, and of the accidental over the planned, and invokes, almost grudgingly, a metaphorical, if not the metaphysical, dimension.

The seven-story central volume supported by concrete shear walls and housing the concrete stacks, forms the core of the library. It is surrounded on all sides but the north by three-story load-bearing brick structures. The enveloping walls of the central volume are cut away at the corners. These corners incisions, which continue diagonally into the heart of the building, serve to bring light into that heart as well as to divide the building into separate functional components; reading rooms and display areas to the south, administration and processing areas to the east, and storage and supporting facilities to the west.