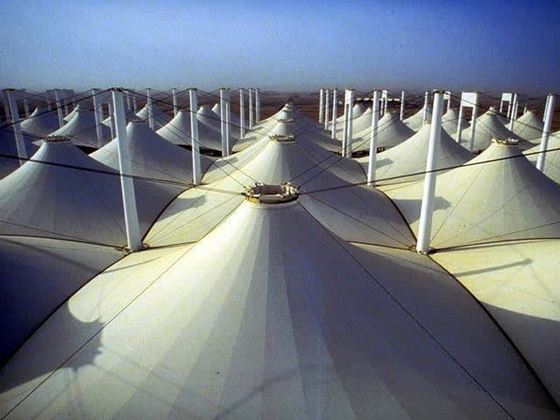 Share
Recipient of the Aga Khan Award for Architecture in 1983.
The Hajj Terminal houses, for a short time, the one million or more pilgrims who make their way to Mecca each year. The capacity of the terminal at any one time is estimated at 50'000 for a period of up to 18 hours during arrival and 80,000 for periods of up to 36 hours during departure. Roofed by a fabric tension structure that covers more area (40.5 hectares) than any roof in the world, the terminal provides toilets, shops, benches and banking facilities for the pilgrims. Twenty-one tent units, each 45 metres square, form a single module. The terminal is comprised of 10 such modules: two identical five-module sections separated by a landscaped mall. Thus, the two large terminal units each comprise a total of 105 tents. The tents are hooked to steel rings hung from suspension cables which are draped from single pylons in the interior of the module, from ladder-like double pylons at the module edges and from four-pylon towers at the corners. The enclosed and air conditioned arrival buildings are located under the tents along the outside edge of the terminal units parallel to the aircraft aprons. In the jury's words: "The brilliant and imaginative design of the roofing system met the awesome challenge of covering this vast space with incomparable elegance and beauty."