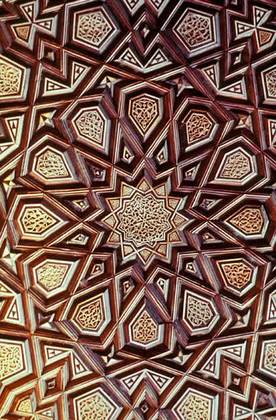 In this collection, I have chosen a number of images that feature patterns and compositions that are based on a sixfold division of a circle. What this means in practical design terms is that these patterns can be considered to have same source of origin: a circle divided into six equal sections. Dividing a circle in this way yields intersections that can be used to create hundreds of different patterns and compositions.

The vast majority of patterns and compositions that can be found in Islamic art and architecture, fall into one of three categories:

Craftsmen across the centuries in the Islamic world made geometric designs with a pair of compasses and a ruler. By drawing circles and lines they made their patterns. The essential design choice that determined which pattern was created begins with: which intersections of lines and circles to connect with a straight line. Which lines the craftsmen chose and, after that, which segment of this line would remain visible in the final chapter, determined the visual end result.

An interesting feature of sixfold geometric patterns are those that feature twelve pointed star patterns. Quite a few of these can be found in these images. These star patterns can be designed by placing:

The collection of images presented here is just a start. More will be added.