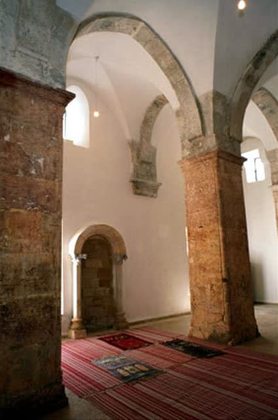 Share
Built in the twelfth century as Church of St. Agnes, the Mawlawiyya was transformed into a mosque in the late Ayyubid (1187-1250) or early Ottoman period. In 1586, a large room was added on top of the prayer hall as a sufi retreat. Since 1980, new housing units were added to the complex by a number of families.

The mosque was in a dilapidated state with remains of inappropriate restoration attempts and extensive dampness in the walls and vaulted ceiling. The original stone pillars were covered with cement plaster. The lower floor of the mosque was buried and sealed for many years from the street and the main building, and filled with debris.

The restoration work involved removing the cement plaster in the prayer hall, treating the dampness, replacing the existing electric system. New lime plaster and lime wash were used, the timber windows were restored, and a new timber door was installed. The lower floor Hall was reopened, cleared and ventilated, the vaults were lime plastered and lime washed, and new marble tiled floor was added on original earth compacted floor. The work also included restoration of facades, the minaret, the courtyard and the mausoleum at the far end of the courtyard. The work was completed in 1999 and today the mosque is used by the surrounding community, and the lower hall is used for the training program by the Technical Office and will continue to be used for educational and cultural activities by Al-Awqaf al-Islamiyya.