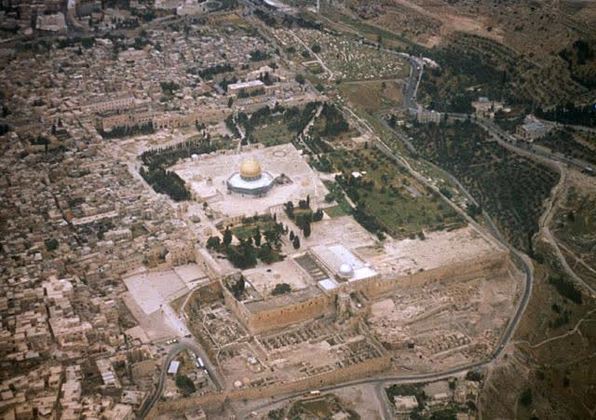 Share
The Haram al-Sharif is a complex site with intricate relationships between its various architectural components and the city at large. This complexity is further complicated by the inherited traditions and meanings from the pre-Islamic Judeo-Christian periods. The site was abandoned from 70 AD, during the Christian era, up until the Islamic conquest. It gained its significance in Islam in the days of Abd al-Malik, less than eight years after the death of the prophet Muhammad. The initial Umayyad architectural scheme is the most comprehensive of the entire site.

After the Muslim conquest, the Temple Mount became known as al-Haram al-Sharif. The current site is an artificial platform built on the foundations of ancient temples, namely the second Jewish temple (built in the 1st century CE). Near the center of the Haram is another platform, atop which the Dome of the Rock, one of the most important sites in Islam, sits. Other major sites in the Haram include the al-Ashrafiyya (1482), labeled the third jewel of the Haram, and the al-Aqsa mosque, built in the seventh century AD.

The trapezoidal raised platform measuring roughly three hundred by five hundred meters occupies the western corner of the city. The Haram surface slopes slightly from north to south due to the irregular topography it is built upon. The al-Aqsa mosque complex occupies the southern side of the platform and sits atop the ancient Double Gate, which is on the south wall of the compound. On the eastern wall, north of the center, is the ancient Golden Gate. Other gates, built later in Muslim rule (such as the Mamluk Gate Bab al-Qattanin on the western border of the complex) give access to the site. In the center of the platform is the second trapezoidal raised platform housing the Dome of the Rock. The second platform is reached by eight sets of stairs, each marked by a threshold of arcades at the top of the steps. East of the Dome of the Rock is the Dome of the Chain, one of the most ancient buildings on the Haram: it was built during the Umayyad period or, as some believe, prior to Islamic rule in Jerusalem. Other small structures such as fountains are scattered about the site.

The second platform is believed to have existed in some form or shape from the time of Herod; however, no detailed evidence exists regarding its previous function, dimensions or its architectural character. The current platform is reached by a single stairway to the east, two stairways on both the north and south and three stairways on the western side. An arcade marking the entry into the sacred Haram crowns each stairway. These stairways vary in their dimensions, but all are open, straight flights of stairs, and their variation in width corresponds to the number of arches at the top of each stair. These arcades vary in style and decoration, according to the various restorations they underwent beginning as early as the tenth century. The arcades were never a continuous element around the platform; rather, they are built as threshold markers into a sort of spiritual center.

During the Mamluk period in Jerusalem, over a period of three centuries, the cultural centrality of the Haram was emphasized by placing almost all building activity in its immediate vicinity or on the streets leading to its gates. Within the boundary of the Haram, the Mamluks are credited for building the Western Portico, the Northern Portico, the Sabil Qaytbay, the al-Fakhriyya and the Fakhriyya Minaret. Immediately adjacent to the Haram to the west are the al-Tankiziyya, the al-Ashrafiyya, and the Suq al-Qattanin, among other buildings from the period. Bordering the north, among others, are the al-Dawadriyya, the al-Aminiyya and the al-Almalikiyya.

Until the reign of Sultan Sulaiman the Magnificent, who considered himself to be second only to King Solomon, the Ottoman rulers of Jerusalem had made only a modest contribution to the architectural development of the site. During his rule, the exterior of the Dome of the Rock was refurbished, the boldest architectural change since the original construction nine hundred years earlier. The architectural language used in this refurbishment incorporated various elements from the wide range of Ottoman imperial architecture, including the use of Ottoman tiles to update the Umayyad exterior.

The Muslim community of Jerusalem has managed the site continuously since the Crusades; this did not change even after the Six-Day War in 1967. Israel continues to allow Muslims to enter and to manage the site, but no architectural work (apart from preservation) has taken place in recent history. Archaeological digs on the site continue to be politically controversial for all parties concerned. The Knesset passed a law in 1967 to ensure the preservation and protection of holy sites, including the Haram. However, in 1969, an Australian Christian fundamentalist set the al-Aqsa Mosque on fire, and the mosque suffered heavy damage.