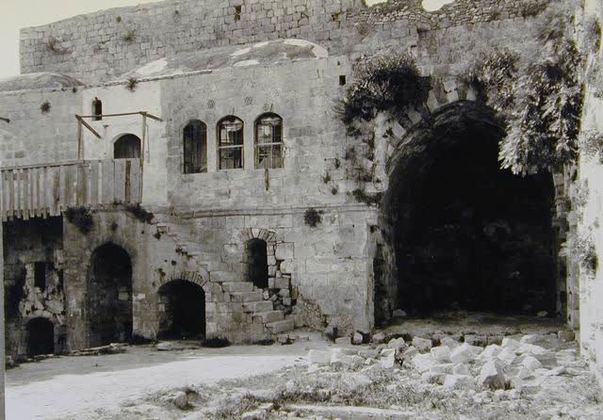 Share
Situated on the western wall of the al-Haram al-Sharif in the old city of Jerusalem, the al-Khatuniyya Madrasa is bordered on the north by the Muzhiriyya Madrasa and the Arghuniyya Madrasa (endowed and built by Amir Arghun al-Kamali in 785/1358), on the south by Suq al-Qattanin ("market of the cotton artisans"), and on the west by a multitude of structures built at different time periods. During the Mamluk rule of Jerusalem (approx. 1260-1516), many Mamluk amirs, merchants, wealthy patrons, and persons with administrative offices found the city’s setting, climate, and atmosphere to be favorable for retirement. These Mamluk patrons were especially encouraged to dwell in Jerusalem after the successive defeats of the Mongols and the Crusaders by the Mamluks in 1260 and 1291, when the city became less politicized. These patrons established many religious endowments, often erected around the passageways branching out of the Haram’s gates and absorbing prestige from the proximity of the Haram.

A two-story building, the madrasa is rectangular in shape (22 by 31.6 meters) with a central open courtyard (16 by 11.4 meters). The courtyard has a well in the middle that connects to an underground cistern. It is divided into two levels across the north-south axis; the east side is raised about 1.45 meters higher than the west side due to debris accumulation on the east side. The right arm of the rectangle comprises three chambers: the tomb chamber in the middle, the anteroom to its north, and the assembly hall to its south. Overlooking the courtyard and situated across from each other are two iwans, adjacent to the anteroom on the north and the assembly hall on the south.

Ten rooms of varying sizes surround the courtyard, and are clustered on the north, east, and south arms of the rectangle, linking the two iwans in a U-shape form. Most of the interiors of these surrounding rooms were altered in terms of their internal partitions or their windows and doors. The corner room on the upper northwest and the lower room southwest are currently inaccessible. The second story includes several rooms which were later additions. The remaining north, west, and south arms of the rectangle contain clustered rooms of various sizes.

The al-Khatuniyya is not accessed directly from the Haram but from a narrow passageway (1.4 meters wide; 14.45 meters long) between the al-Arguniyya and the al-Muzhiriyya Madrasas. This narrow passageway originates and branches out southward from the Tariq Bab al-Hadid that leads from Bab al-Hadid (“Iron Gate") to the west, along which the Ribat al-Kurd (built in 1296 by Sharif al-Din Kurd, a mamluk of Sultan Qalawun), the al-Jawhariyya Madrasa, and the Hanbaliyya Madrasa are situated, along with several other religious endowments.

From this narrow passageway one enters a barrel-vaulted vestibule (3.2 by 4.8 meters), which originally opened directly onto the courtyard from its south wall. Today, this door is blocked by an external staircase leading to the upper floor - an Ottoman addition rendering the vestibule’s door a high window. The courtyard is accessed through two doors on the east and west walls of this vestibule area. The door on the east wall is preceded by six steps leading to the north iwan and from there to the courtyard. The door on the west wall connects to an adjacent room (2.6 by 5 meters) that opens onto the courtyard at its south wall.

The two iwans are located across from each other on the north-south axis. Their arches overlook the courtyard, and are both built in the ablaq technique of alternating red and cream-colored voussoirs. The north iwan (6.4 by 4 meters), re-built in 1920, is situated to the west of the anteroom at the northeast corner of the madrasa. Its very thin north wall is shared with the Arghuniyya Madrasa, where the Arghuniyya’s mihrab is located. The south iwan (4 by 3.4 meters) is located to the west of the assembly hall at the southeast corner of the courtyard. On the east wall of the south iwan there is a pointed-arch niche in the wall with a grilled window (now blocked) that once led to the assembly hall on the east wing of the Madrasa. From its southern wall, another arched niche leads to the northern lodgings (rubu') of Suq al-Qattanin, which is a modern addition.

The anteroom (5.4 by 4.1 meters) is accessed from the north iwan to the east. Its ceiling comprises two cross barrel vaults (4.2 by 2 meters each) on the east-west axis and separated by a transverse arch. A door on the south wall of the anteroom, now blocked, leads to the tomb chamber on the south. It is decorated with a simple plaster frame that ends in volute finials at the door’s base.

The tomb chamber is almost square in plan (5.4 by 4.8 meters); as mentioned earlier, it was accessed from the northern anteroom through a recessed pointed-arch doorway (now blocked) built with ablaq technique on the east wall of the north iwan. Two cenotaphs are located in the tomb chamber, one marking the grave of Ughul Khatun, the other that of Sharif Abd al-Hamid. Four pointed arches on each of the four walls of the tomb chamber create four pendentives that carry an octagonal transitional zone ( which appears cylindrical on the exterior) on top surmounted by a semi-pointed dome. The octagonal drum has eight pointed-arched windows with their lower level beginning from the roof level of the first floor.

All of the chamber’s interior walls are built in ablaq red and cream-colored stones except the eastern (Haram) wall, which is plastered. Along these three walls, a cornice molding projects; it is situated at the same level where the arches descend from the corner columns. Remnants of elaborate stucco ornamentation of vegetal arabesque motifs are evident on the surfaces of the pendentives and the tympanums. Each tympanum has a middle pointed-arch window.

To the south of the tomb chamber, the assembly hall (5 by 8.8 meters) is oriented north-south and used to be accessed from three different entrances, now blocked: from the recessed entrance door on its courtyard wall, from the al-Haram wall on the east, and from the upper tomb chamber. Today the only entrance is located to the south of the Haram wall. The assembly hall has two barrel vaults on the north and west walls (1 meter deep and 1.4 meters deep, respectively). From the four corners of the hall rises a folded cross vault on top of which sits an octagonal cupola at the center. The mihrab, located at the center of the hall’s south wall is a compound arch with two concentric arches set within one another. The external ablaq arch does not have a columnar support aligned with the wall’s surface, and therefore it appears to float. The second recess is a smaller pointed arch opening in ablaq with a half cylindrical niche (radius, one meter) on top of which sits a semi-domed conch. The assembly hall holds the tombs of five historical Jerusalemite figures, among whom are: Muhammad Ali al-Hindi, Musa Qathem al-Husseini, Abd al-Qader al-Husseini, Ahmad Hilmi Abd al-Baqi, and Abd al-Hameed Shouman. Sources differ on the tombs located in the tomb chamber and the assembly hall, and it may be that the Abd al-Hameed Shouman mentioned here is the same as the Sharif Abd al-Hamid who is described as having been interred in the tomb chamber.

Many Mamluk amirs were sent to reside in the al-Khatuniyya, usually when exiled (e.g., Amir Kha’irbak al-Zahiti Khushqadan, known as the "Sultan for a Night"). During the sixteenth century (the Ottoman period), the Ibn Jama’a family was responsible for the madrasa'a endowment.

Today, the al-Khatuniyya serves as the residence of the al-Khatib family. This change in use resulted in many alterations, particularly in the elevation overlooking the al-Haram, which blocked direct access to the madrasa through the assembly hall and tomb chamber. In addition, multiple structures were added to the courtyard and to the roofs of the rooms surrounding it. Architectural historians consider the al-Karimiyya Madrasa to be emblematic of the religious institutions that emerged in the Mamluk period, created out of the stability and prosperity of a peaceful Jerusalem.

Burgoyne, Michael Hamilton. 1987. Mamluk Jerusalem, An Architectural Study. London: Published on behalf of the British School of Archaeology in Jerusalem by the World of Islam Festival Trust, 343-355.