Statistics of the Capital, Tehran (Documents from Tehran’s Social History During the Qajar Era) 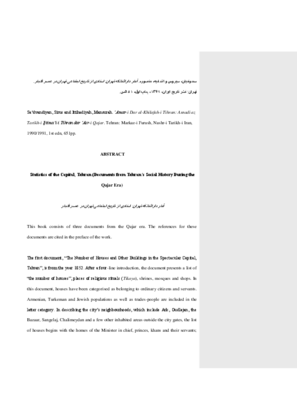 Citation
Esmailpour Ghouchani, Iradj. '"English abstract of 'Statistics of the Capital, Tehran (Documents from Tehran’s Social History During the Qajar Era'". Translated by Niki Akhavan. In Cities as Built and Lived Environments: Scholarship from Muslim Contexts, 1875 to 2011, by Aptin Khanbaghi, 16. Edinburgh: Edinburgh University Press, 2014.
Description
سعدوندیان، سیروس و اتحادیه، منصوره. آمار دارالخلافه تهران: اسنادی از تاریخ اجتماعی تهران در عصر قاجار. تهران: نشر تاریخ ایران، ١٣۶٨، چاپ اول، ٦۵١ص
Sa‘dvandiyan, Sirus and Ittihadiyah, Mansurah. ’Amar-i Dar al-Khilafah-i Tihran: Asnadi az Tarikh-i Ijtima‘i-i Tihran dar ‘Asr-i Qajar. Tehran: Markaz-i Furush, Nashr-i Tarikh-i Iran, 1990/1991, 1st edn, 651pp.
ABSTRACT
Statistics of the Capital, Tehran (Documents from Tehran’s Social History During the Qajar Era)
آمار دارالخلافه تهران: اسنادی از تاریخ اجتماعی تهران در عصر قاجار
This book consists of three documents from the Qajar era. The references for these documents are cited in the preface of the work.
The first document, “The Number of Houses and Other Buildings in the Spectacular Capital, Tehran”, is from the year 1852. After a four-line introduction, the document presents a list of “the number of houses”, places of religious rituals (Tikaya), shrines, mosques and shops. In this document, houses have been categorised as belonging to ordinary citizens and servants. Armenian, Turkeman and Jewish populations as well as trades-people are included in the latter category. In describing the city’s neighbourhoods, which include Ark, Oudlajan, the Bazaar, Sangelaj, Chalimeydan and a few other inhabited areas outside the city gates, the list of houses begins with the homes of the Minister in chief, princes, khans and their servants; after listing the homes of religious and other scholars, it continues with the homes of ordinary citizens. However, the structural features and physical placement of the houses are left unaddressed. In its concluding segments, the document notes the total number of places of religious ritual (Tikaya) , schools, mosques, artillery centres, warehouses, shrines, doctors’ clinics, weapons warehouses, and unusable urban lands.
The second document is an eight-page text called “Geography of the Resident Population of the Protector Capital”, which was edited by Abdul-Ghafar Mujnem-Bashi in 1869. Four pages of this document are devoted to covering the methods and shortcomings of the statistical approach.
The last document of this book, “Identifying and Recording Buildings in the Areas Near the Trenches around the Spectacular Capital”, is by Akhzar Alishah and dates to 1899. The method of classifying neighbourhoods is the same in the first and second documents. In the third document, however, which dates to the era of Muzaffaredin Shah, the names and order of the neighbourhoods have changed and been labelled as “hangouts”. Generally, this is done in accordance with the names of persons who have the title of “deputy” such as “the hangout of deputy Aziz”. In addition, many transit areas are marked with the label “police” such as the transit area called “Abbas Police”.
Despite the fact that one of the documents is entitled “geography”, none of its pages contains a map of Tehran. At the same time, all three documents provide a sense of the urban space of Tehran during the beginning and middle years of Nassirdin Shah’s reign as well as the beginning of the reign of his son, Muzaffaridin Shah Qajar. As such, the book may be of notable interest to historians and anthropologists, as well as city planning researchers.
Iradj Esmailpour Ghouchani
Translated by Niki Akhavan
Associated names
Associated collections
Related publications
Keywords
historical architecture
Country
Iran
Language
English
File type / Size
PDF / 353 KB
Document Date
2014
Copyright
Muslim Civilisations Abstracts - The Aga Khan University
Source
Muslim Civilisations Abstracts - The Aga Khan University